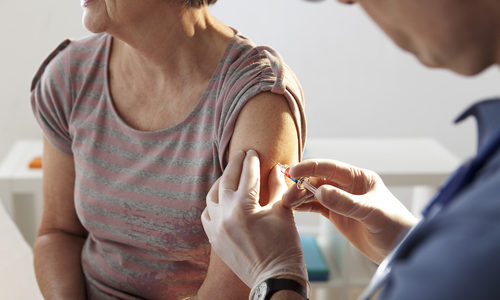 Looks like we found those weapons of mass destruction after all…

And they’re in this year’s flu vaccine.

Big Pharma is working overtime this fall to sell us a new flu shot called Fluad.

They’re even claiming it has a special “immune-enhancing ingredient.”

And it can wreck your health in dozens of different ways.

Seniors are fishing, taking country drives, or spending time with the grandkids.

And, as the ad says, they just “don’t have time” for flu.

But if you let some doctor inject you with Fluad, you may not have much time for anything.

You see, that secret ingredient in Fluad is an “adjuvant” called MF59.

Adjuvants are supposed to jumpstart your immune system, but MF59 has a MAJOR problem.

Remember that “Gulf War Syndrome” that left thousands of our soldiers sick back in the 1990s? Well, medical experts believe it was caused by an experimental anthrax vaccine that had squalene oil.

And squalene vaccines made so many soldiers sick at Dover Air Force Base that some completely left the military to avoid the injections.

This is what vaccines with squalene oil were doing to young, healthy men and women – imagine the trouble they could cause for seniors.

I’ve warned you before about the risks of getting flu shots – they don’t work and can cause plenty of side effects.

But Fluad is not just any flu shot. It comes with risks that no senior should be asked to tolerate.

To protect yourself during flu season, stay vigilant about your immune health.

Take vitamins C and D as well as daily zinc and probiotic supplements.

And that sounds a whole lot better to me than gambling with Fluad… or its secret ingredient.

Fighting For Your Health,