You’ve done everything you can to lose weight.

You’ve dieted… you’ve worked out like a Green Beret… and NOTHING seems to work.

But what if I told you it’s not your fault?

For the past 38 years, a secret ingredient has been added to the U.S. food supply.

It forces us to overeat – and makes it nearly impossible to lose weight.

This additive is so dangerous that it’s been banned all over the world.

But our government isn’t doing a thing about it… in fact, they don’t want you to know about it at all.

BHT – or butylated hydroxytoluene – is an artificial preservative used in literally thousands of different foods we eat every day.

And it’s a straight-up poison.

It’s been linked to everything from learning disabilities to cancer.

And now we know it’s driving America’s obesity epidemic, too.

Researchers from Cedars-Sinai Medical Center have discovered that a group of chemicals in BHT disrupts communication between the gut and brain that tells us when we are full.

In other words, once BHT gets into your body, you’re practically guaranteed to overeat.

And this stuff is everywhere. Think of it like a “fat pill” we’re being tricked into taking every day.

They’ve been feeding us this stuff since birth!

What’s worse? Our government has known about this for decades. 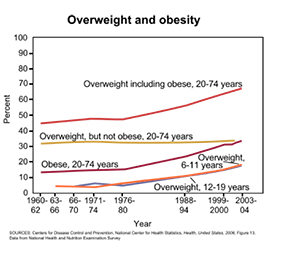 If you look at the chart to the left, you’ll notice that almost immediately afterwards, the rate of obesity in the United States began to skyrocket.

Other countries, including Japan and most of Europe, have since banned BHT.

But not the U.S., where our government is too spineless to stand up to billion-dollar food interests.

In fact, the FDA places practically no restrictions on BHT at all.

You’ve got to be kidding me!

Uncle Sam isn’t going to protect us – so it’s up to us to protect ourselves. The easiest way to avoid BHT is to stop eating processed foods completely.

If that’s not practical, be sure you’re always reading labels. You’ll be shocked at all the places where you’ll find this stuff.

Fighting For Your Health,